From Heraldry of the World
Your site history : Singleton
Jump to navigation Jump to search 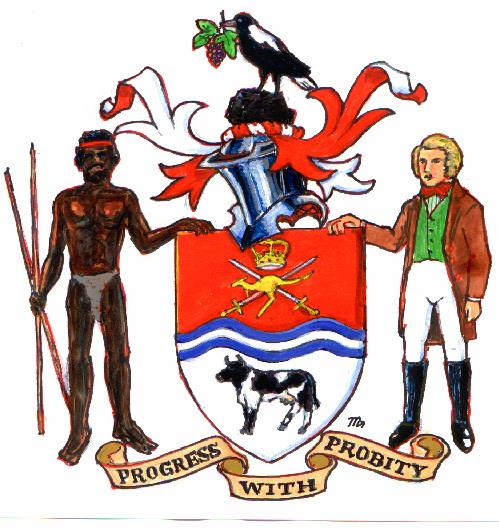 Singleton Council wished to mark its continuing links with the Australian Army, which has a major Camp near the town, by including the Army Emblem. Permission had to be granted by the Queen to include the Royal Crown above the crossed swords and kangaroo, on the field of red. The wavy lines across the centre depict the Hunter River, which flows through Singleton to the port at Newcastle. In early days produce from Patrick's Plains, as Singleton was known, had to be shipped by river. The Friesian cow alludes to the importance of the dairy industry, while the grapes in the Magpie's beak Allude to the famous Hunter Valley wines.

The stand of coal of course represents coal mining, which has long been important to the district. The Magpie is common in the area and the supporters honour the original inhabitants and the early European landowners.