From Heraldry of the World
Your site history : Slough
Jump to navigation Jump to search 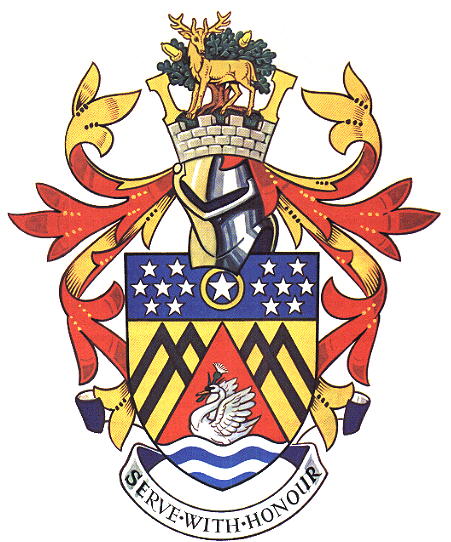 Arms : Per chevron Or and Gules on Waves barry wavy Argent and Azure a Swan proper holding in the beak a White Pink slipped and leaved proper the whole between four Chevronels interlaced Sable on a Chief Azure within an Anulet Or a Mullet Argent between fourteen like Mullets.
Crest : Rising from a Mural Coronet proper a Mount Vert theron in front of an Oak Tree proper fructed Or a Stag at gaze between two Brick-Axes all Gold.
Motto: 'SERVE WITH HONOUR'

The swan is the symbol for Buckinghamshire, the county in which the district was situated and is taken from the old borough arms(see below). The swan holds in its beak a flower, a symbol for the horticultural activities in the district. The interlaces chevrons (black lines) symbolise the modern technology, especially the manufacture of alloys.

The chief shows a night sky and a large star surrounded by a golden ring. The latter symbolises the planet Uranus, which was discovered by Sir William Herschel, who originated from the district.

The crest is derived from the arms of Berkshire in which the district is presently situated. The stag is flanked by two brick axes, symbols for the former brick making industry in the borough. 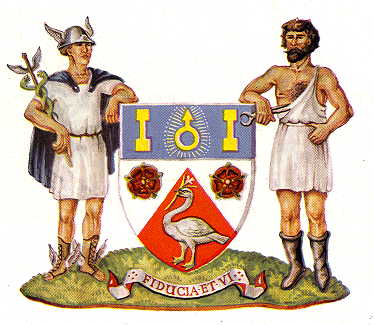 Arms : Per chevron Argent and Gules in chief two Roses of the last barbed and seeded proper and in base a Swan holding in the beak a White Pink slipped and leaved also proper on a Chief Azure the Astronomical Symbol of Uranus ir­radiated between two Brick-Axes Or.
Supporters : On the dexter side a Figure of Mercury proper vested Argent mantled Azure and on the sinister side a Figure of Vulcan proper vested Argent holding in the dexter hand a Pair of Pincers also Argent.
Motto: 'FIDUCIA ET VI' - By confidence and strength

The arms were officially granted on September 3, 1938.

As in the new arms the swan stands for Buckinghamshire, the the flowers for the horticulture in the borough.

The brick-axes refer tothe brick-making and the sign of Uranus is from the arms of the family of Herschel of Slough, and relates to the discovery of the planet Uranus by Sir William Herschel.

The supporters are the gods Mercury and Vulcan and symbolize trade and industry.

Literature : Images and information provided by the Slough Library (AlisonD@sloughlibrary.org.uk)