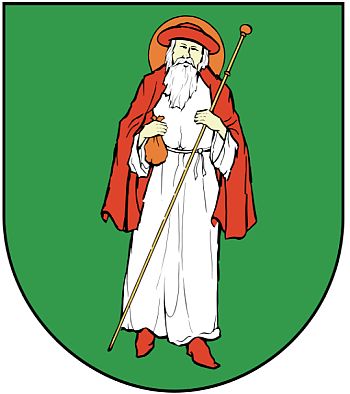 The arms were officially adopted on February 3, 2003.

The oldest known seal of the city (German name Zobten am Berge) dates from 1448 and shows a female figure, most likely St. Mary, patron saint of the Sand Convent in Wroclaw, to which the village belonged since the 12th century.

The second known seal dates from the 17th century and shows the pilgrim, probably St. James the Elder. The origin or meaning of the pilgrim, however is not known. In 2003 the arms were officially described as St. James.

In 1960 the town adopted arms with the Silezian Eagle and an image of a prehistoric drawing, found in the Ślęża mountain in the municipality, was placed. The historical arms were re-introduced in 2003.