Society of Dyers and Colourists

SOCIETY OF DYERS AND COLOURISTS 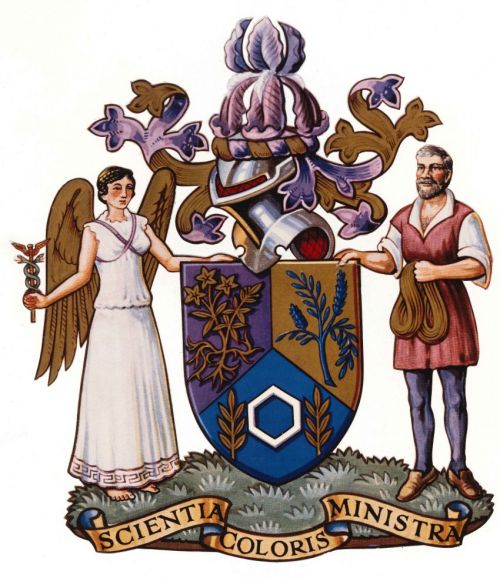 Arms : Tierce in pairle reversed purpure, Or, and azure, in chief a madder plant eradicated gold and a slip of indigo leaved and fructed also azure and in base between two slips of the grain tree leaved also gold a hexagon argent voided of the field.
Crest: On a wreath Or and purpure, A Purple Iris flower proper.
Supporters: On the dexter side a female figure representing the goddess Iris, habited argent with wings Or and holding in the exterior hand a caduceus proper, and on the sinister side a male figure representing a craftsman of the dyer's trade in seventeenth century habit proper, holding in the exterior hand a hank of silk also Or.
Motto: Scientia coloris ministra.

The arms were officially granted on December 20, 1956.

The shield incorporates several elements used in the design of the Presidential Badge of the Society presented in 1951 by the Worshipful Company of Dyers of the City of London. The shield is divided into three areas of heraldic colour, with purpure and or in the upper areas and azure in the lower. These approximate to the subtractive primary colours.

In the lower area is a silver hexagonal benzene ring, symbolising the chemical and technical achievements of the industry, placed between two slips of the grain-tree. In the upper areas are placed emblems representing the madder and indigo plants respectively.

The dexter supporter is the goddess Iris, who, as a messenger of the gods, had the rainbow as one of her symbols. She was, in fact, accepted as the goddess of the rainbow, which, in this case, is symbolic of colour in general. As a messenger of the gods she carries in her right hand a caduceus or herald's staff. The sinister supporter is a dyer in seventeenth-century attire holding a skein of silk.

The crest is a purple iris flowering on a wreath of gold and purple, the allusion being to the dexter supporter already described.

The Latin motto Scientia Coloris Ministra ("Science is the Servant of Colour") refers in general terms to the aims both of the Society and of the industry as a whole.