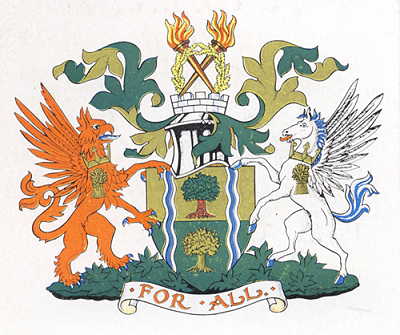 Arms: Per fesse Or and Vert two Thorn Trees in pale that in chief proper and that in base of the first between two Pallets wavy Argent each charged with a like Pallet Azure.
Crest: Out of a a Mural Crown two Torches inflamed in saltire enfiled with a Wreath of Wheat-ears all proper; Mantled Vert doubled Or.
Supporters: On the dexter side a Griffin Gules and on the sinister side a Pegasus Argent crined queued and unguled Azure each gorged with a Saxon Crown and charged on the shoulder with a Garb Or.
Motto: 'FOR ALL'.

The thorn trees allude to the old Spelthorne Hundred and the ' south holt ' and the ' north wood ' commemorated in the name Southall-Norwood, which was borne by the former Urban District. The blue and white waves represent the local streams.

The wheat alludes to the local food producing industries and the torches to the gas and electricity industries.

The griffin is the emblems of the London Passenger Transport Board, indicating that London's omnibuses are made in Southall, and the motto translated into Latin, hints at the same fact. The pegasus represents both the canals that pass through Southall and the areodromes in its vicinity. The Saxon Crowns are from the arms of the County.