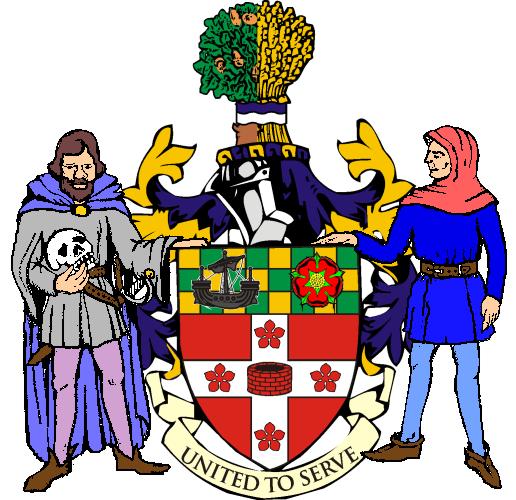 Arms : Gules on a Cross Argent a Well Head between four Cinquefoils Gules on a Chief chequy Or and Vert a Lymphad sail furled Sable and a Rose Gules barbed and seeded proper.
Crest : On a Wreath Or and Azure an Oak Tree proper fructed and dimidiating a Garb Or both banded per fess wavy Argent and Azure.
Supporters : On the dexter side an Elizabethan Player habited as for the role of Hamlet holding a Skull in the exterior hand and on the sinister side a Youth habited in early Fifteenth Century dress all proper.
Motto: 'UNITED TO SERVE'

The arms are based on the arms of the former councils. All three of the merged towns had either crosses or quartering in their arms. Thus it was natural to include a cross in the new arms. This is charged with a well head and four cinquefoils from the arms of Camberwell (see there).

The chief is checky of or and vert. This recalls the blue and gold De Warennes checks and thus the county of Surrey. The colouring is also said to suggest the mixture of historic communities (gold) and new development (green). On this are placed a black ship taken from Bermondsey's arms, for the presence of docks in that area.

The design is completed by a red rose from the old Southwark arms. Thus all three towns are shown in the shield.

The crest has an oak tree dimidiated with a wheatsheaf, bound together by a blue and white wave. This suggests the activities of the area's docks, importing timber and foodstuffs. The crest wreath and mantling are in the blue and gold livery colours of Surrey. Until 1889 the area of Southwark was part of that county.

The supporters show the literary associations of the Borough. On the left is an Elizabethan actor dressed as Hamlet contemplating Yorrick's skull. This reminds us that William Shakespeare's plays were first performed at the Globe Theatre in the Borough. This theatre has recently been rebuilt on its original site. On the right is a 15th century youth. He represents Chaucer, author of The Canterbury Tales. Some of the action of this major work of English literature was based in Southwark.

The motto was taken from the old Southwark arms (see below). 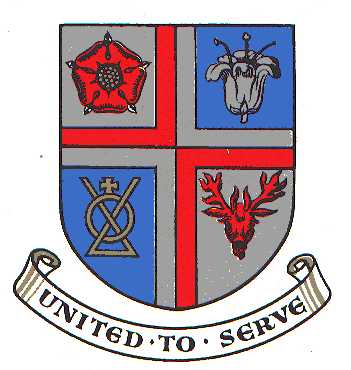 The quarters contain the emblems of the four parishes in the borough; St Mary Overy, symbolised by the red rose in the first quarter; St Mary Newington, symbolised by the white lily in the second quarter and Christ Church, symbolised by the stag's head in the fourth quarter. The curious design in the third quarter is the mark of the Bridge House, the headquarters of the officers connected with London Bridge, this house having anciently been situated in Southwark. It also represents the parish of St George the Martyr, the fourth former parish.