From Heraldry of the World
Your site history : Spahnharrenstätte
Jump to navigation Jump to search 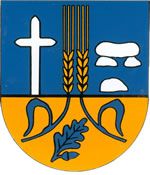 The two wheat-ears symbolise the agricultural character of the municipality. They also symbolise the two former municipalities that merged to the new municipality of Spahnharrenstätte. The oak leaf in the base is a symbol for the many oak trees in the villages, especially the village squares. The cross is a symbol to remember the plague epidemy, which stuck the villages in the 17th century. The Sone Age grave symbolises the many monolithic structures that can be found in the region. It also indicates the longtime inhabitation of the area.