From Heraldry of the World
Your site history : Special Troops Battalion 8th Army, US Army
Jump to navigation Jump to search 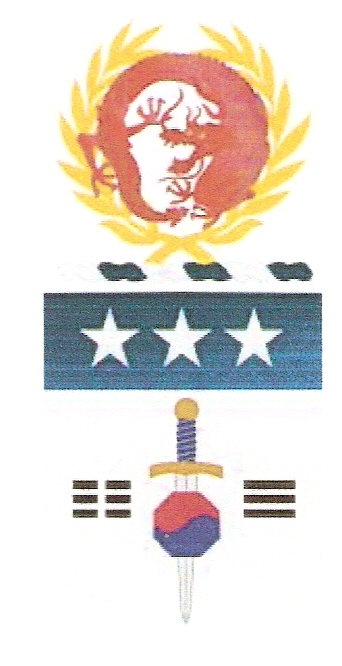 Shield: Argent, and antique sword palewise point down, blade of the first, griped Azure (Teal Blue), pommel and hand-guard Or. surmounted by an octagonal Taeguk Proper between two Korean trigrams, to dexter side a Gon, to sinister side a Geon Sable, on a chief Azure (Teal Blue) Three Mullets fesswise of the first.
Crest: On a wreath Argent and Azure (Teal blue) a stylized wreath of laurel Or surmounted by a coiled Korean dragon Gules.
Motto: Honor defend unite

Korea is represented by the Taeguk, the octagon indicates the US 8th Army.The Sword symbolises readinessa ned defence. The three stars indicated the three years the US froces was involved in the Korean conflict. The trigrams stands for West and East and symbolises the US involvement in Korea. The are also to be found on the Flag of the Republic of Korea. The Crest shows he Dragon taken from the Korean Defense Service Medal and recalls the Battalion's participation in that conflict. The laurel wreath denotes honor and achievement. The Coat of Arms was apporved 11 June 2008.

Literature: The Institute of Heraldry, US Army.