From Heraldry of the World
Your site history : Speyer
Jump to navigation Jump to search 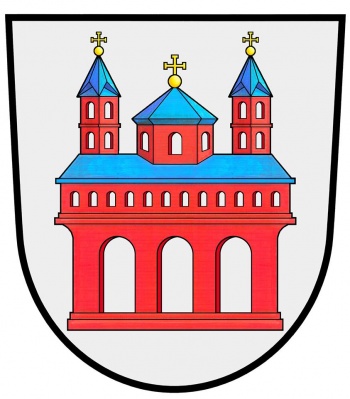 The oldest seal of the city dates from the early 13th century and shows the Northern part of the cathedral. The cathedral was used on seals only until 1263, but remained on the arms of the city. The seals showed until 1800 a gate with the image of the St. Mary with child.

The cathedral can be seen in the arms of the city in a roll of arms from 1398, a relief from 1469 and many images from later centuries. As there was no consistency in the images, it was decided in 1845 to use the Western façade of the cathedral in the arms. The colours are known since the 16th century.

Speyer was the capital city of the independent diocese or State of the same name. The diocese used as arms a silver cross in blue, which can be seen in many arms of villages and towns that historically belonged to the State of Speyer. The State was dissolved as an independent country in 1803. Examples of village arms with the cross are: Arzheim, Bruchsal, Deidesheim, Elchesheim, Friedelhausen, Hilpertsau, Hochspeyer, Philippsburg, Rauenberg and others.