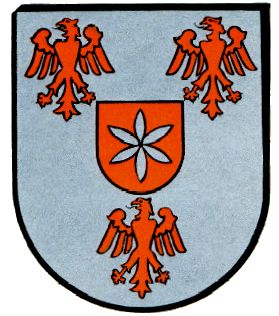 The arms were officially granted on February 9, 1939.

The arms show three eagles, taken from the arms of the Von Arnholte family, who originated from the area and ruled the village as bailiffs of the Herford Abbey. The escutcheon shows a symbol which is often seen as decorations in the local farmhouses. The colours are those of the Minden Convent, to which the area historically belonged.