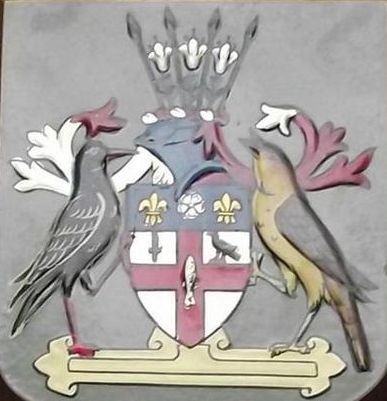 Arms : Argent, on a cross between in the first quarter a sword erect gules and in the second quarter a chough proper, a roach haurient of the first; on a chief azure a rose of the field, barbed and seeded proper, between two fleurs-de-lys Or.
Crest: On a wreath of the colours, Between four spears, points upwards, sable, embrued gules, three Madonna lilies argent, stalked and leaved vert.
Supporters: On the dexter side a chough, and on the sinister side a nightingale, both proper.

The arms were officially granted on February 14, 1950.

The cross and sword refer to the city of London.

The two choughs (on the London arms and as a supporter, popularly know as the Becket bird) represent Thomas Becket after which the hospital is named.

The spears in the crest represents Thomas the Apostle, who was speared to death.

I have no information on the other elements.