From Heraldry of the World
Your site history : Stanzach
Jump to navigation Jump to search 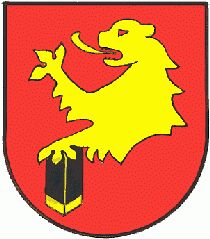 The arms were officially granted on February 11, 1975.

The lion is taken from the arms of the (Hohen)Staufen family, who owned the area in the 12th century. The stone is a borderstone and symbolises the border with Bavaria sinc ethe 13th century.