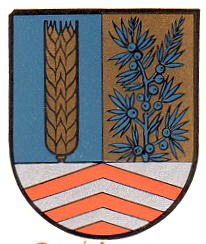 The red chevrons are taken form the old county Ravensberg, to which the area historically belonged. The town was well known for the production of the Steinhäger, a kind of gin. The product was made of wheat and juniper, which are shown in the upper half of the arms.