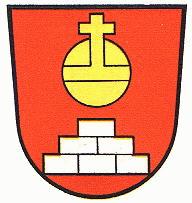 Even though Steinheim became a city only in 1955, it had already a seal in 1558. The seal showed a pile of tones (canting, Stein is stone), from which is growing a plant. A later seal, dating from 1690 shows the same stones, but now with a letter S. The orb as in the present arms, first appears in the early 19th century. The origin or meaning, however, is not clear. The arms have not changed since.