From Heraldry of the World
Your site history : Stellenbosch
Jump to navigation Jump to search 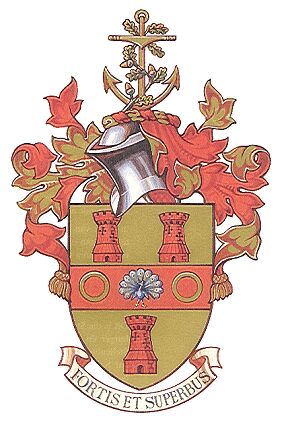 The arms are reminiscent of the arms granted to the Drostdij of Stellenbosch in 1804 (see below), but deliberately ignore several features.


Firstly, the heralds ignored or failed to understand the common feature found in all the arms granted to the five drostdijen and to the Raad der Gemeente Kaapstad (Cape Town Community Council), namely an anchor serving as a supporter.

As a result the anchor appears in these arms, but is relegated to the crest, where it is joined by a sprig representing the oak trees which the town's founder, Governor Simon van der Stel, had planted in great numbers in the town. The town is still known for its oaks, several of which survive from Van der Stel's time, and its nickname in Afrikaans is Eikestad (City of Oaks).


The shield of the 1804 arms contains the device (an elaboration of his original family arms) used by the governor. The 1952 grant repeats a few elements from those arms, but also adds two gold annulets (rings).
Gold annulets on red - three of them are found in the arms of Jan van Riebeeck's son Abraham - appear frequently in South African coats of arms as a token of their South Africanness.

The original Van der Stel arms were Or, three towers gules, so the simplicity of that coat is repeated in the town's arms.


The peacock is blazoned as being "proper", but has more of a silvery appearance. It is nonetheless drawn with the characteristic "eyes" on the tail feathers. 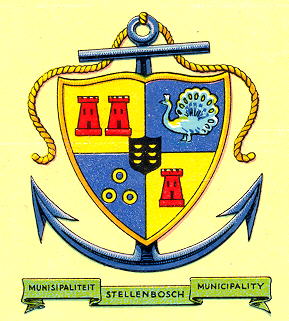 The above arms were granted by Commissioner-General Jacob Abraham Uitenhage de Mist to the Drostdij of Stellenbosch in 1804 are those used by Governor Van der Stel (who died in 1712) and were carved on his tomb in the Groote Kerk in Cape Town. This was destroyed in 1836 when the church was rebuilt, but the arms were recorded by Charles Davidson Bell, Surveyor-General of the Cape Colony.


These original arms fell into abeyance in 1827 when drostdijen were abolished in the Cape Colony. However the right to them was assumed when Stellenbosch attained municipal status in 1840 - the first country town in South Africa to gain this status - and they continued in use until the grant of 1952.