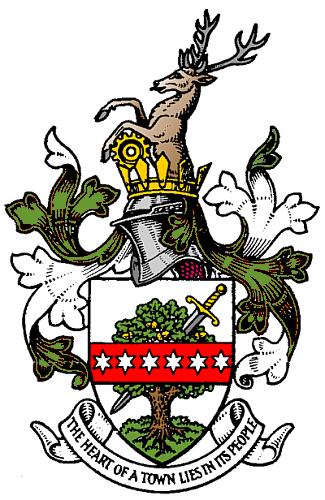 Arms : Argent on a Mount in base point Vert an Oak Tree eradicated proper fructed Or transfixed with a Sword in bend sinister point downward also proper hilt and pommel also Or and over all a Fesse Gules charged with six Mullets of six points Gold.
Crest : Out of a Crown Palisado Or a demi Hart proper its sinister fore leg resting upon a Cogwheel Gold, Mantled Vert doubled Argent.
Motto: 'THE HEART OF A TOWN LIES IN ITS PEOPLE'

Upon the helm is a crown of palisades in gold. This represents a planned area. The crest proper is a figure in half-length of a hart, which comes from the Arms of the County of Hertfordshire in which Stevenage is situated. The hoof of the hart rests on a cogwheel. This symbolises the modern industry carried on in the industrial area of the New Town.

Stevenage was designated as a New Town in 1949 and the development project was carried out by the Stevenage Development Corporation. 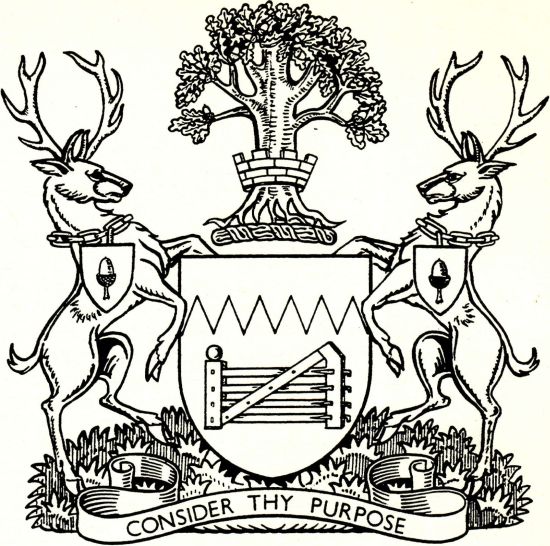 Arms : Or, a four-barred gate sable; a chief indented azure.
Crest: On a wreath of the colours, An oak tree fructed and eradicated proper enfiled at the base with a mural crowngules.
Supporters: On either side a stag proper gorged with a chain, pendent therefrom an escutcheon Or charged with an acorn slipped also proper.
Motto: Consider thy purpose.

The corporation received arms on October 26, 1950.