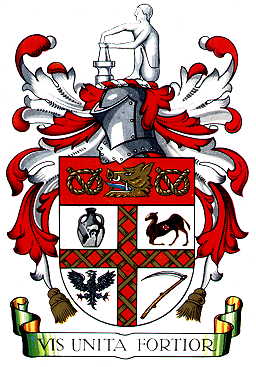 Arms : Argent a Cross Gules fretty Or between in the first quarter a representation of the Portland Vase in the second a Camel kneeling proper charged on the body with an Escutcheon Argent thereon a Cross Gules in the third an Eagle displayed Sable and in the fourth a Scythe also proper on a Chief of the second a Boar's Head erased between two Stafford Knots of the the third.
Crest : On a Wreath of the Colours a Potter of ancient Egypt at his Wheel Argent.
Motto: 'VIS UNITA FORTIOR'-United strength is stronger

The arms comprises emblems used by the six merged towns. The red and gold fretty cross is derived from the arms of the Audley Family and was part of Burslem's arms. Around this arranged in the first quarter a Portland Vase (for Fenton), a kneeling camel charged with a shield of St. George (for Hanley - from the arms of John Ridgway), a black eagle (for Stoke-upon-Trent) and a scythe (for Tunstall - from the Sneyd Family arms).

The chief has a boar's head for Longton and taken from the arms of Heathcote of Longton Hall. On either side is a Stafford knot to show that the city is in Staffordshire. The crest is an ancient Egyptian potter at his wheel. Stoke is one of the world's most important centres of pottery production, and is known as The Potteries. The motto is VIS UNITA FORTIOR, meaning Strength United is More Powerful.