From Heraldry of the World
Your site history : Special:RecentChanges > Storstrøm
Jump to navigation Jump to search 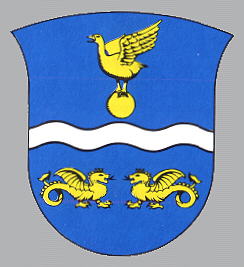 The name Storstrøm refers to the Storstrømmen, the body of water between the islands of Falstar, Lolland, Møn and Sjælland. This is symbolised by the wavy bar.

The goose in the upper part is taken from the arms of the former Præstø district, which showed a tower (the Goose-tower), with the goose as a weather vane. This symbolises the area of the district North of the Storstrømmen

The dragon is taken from the arms of the former Maribo district and symbolise the southern half of the district.