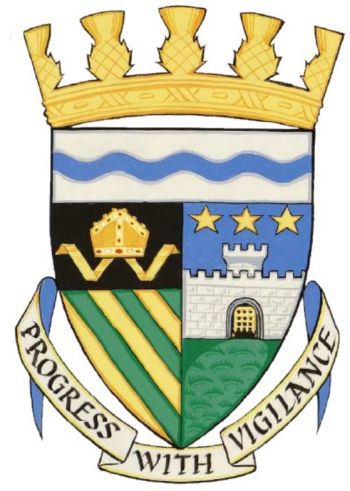 Per pale: dexter, per fess Sable and bendy Or and Vert, in chief an episcopal mitra pretiosa of the Second stoned and jewelled Proper; sinister, Azure, a wall towered and embattled Argent, in the port Sable a portcullis Or, standing upon a mount Proper, in chief three stars of five points Or; over all on a chief Argent, a barrulet wavy Azure.

Above the Shield is placed a coronet appropriate to a statutory District, videlicet:- a circlet richly chased, from which are issuant eight thistle-heads (three and two halves visible) Or; and in an Escrol under the Shield this Motto "Progress with Vigilance".

The arms are based on the arms of Kirkintilloch and Bishopbriggs. The mitre symbolises the Bishops and Archbishops of Glasgow, the gold/green pattern the canting 'riggs', which belonged to them. The towered wall symbolises the Roman Fortress and is taken from the arms of Kirkintilloch. The three stars refer to the ecclesiastical connections of the town and stand for the trinity (3) and the pentalpha (5-pointed star, symbol of the wounds of Christ). The chief shows a wavy bar for the Kelvin river.