From Heraldry of the World
Your site history : Straubing (kreis)
Jump to navigation Jump to search 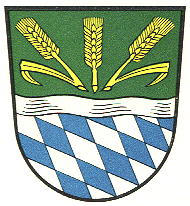 The arms show in the upper part a symbol for the mainly agricultural character of the district. The wavy bar is the Donau river. The lower part shows the arms of the Wittelsbach family, who originated in the area and later became Dukes and Kings of Bayern (see also the arms of Bayern).