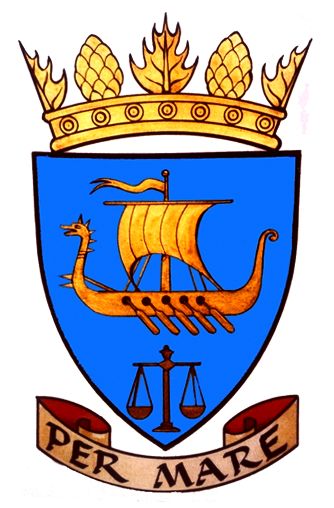 Azure, a dragon ship under sail, oars in action and flagged, and in base a pair of balances all Or.

Above the shield is placed a Coronet appropriate to a statutory Community Council, videlicet:- a circlet richly chased from which are issuant four thistle leaves (one and two halves visible) and four pine cones (two visible) Or, and in an Escrol below the same this Motto "Per Mare".

The Burgh of Stromness never had official arms. The arms of the current Community Council are based on the old seal of the Burgh.

The Viking ship set on a sea recalls the Norse antecedents of this sea-port town; the colours (blue and gold) are those of the ancient Earldom of Orkney. The scales symbolise justice and recall the prolonged litigation between Stromness and the royal burgh of Kirkwall, over trading privileges and local taxation, and the eventual House of Lords decision in 1758 in favour of Stromness.

The Latin motto "By sea" is also taken from the burgh seal.