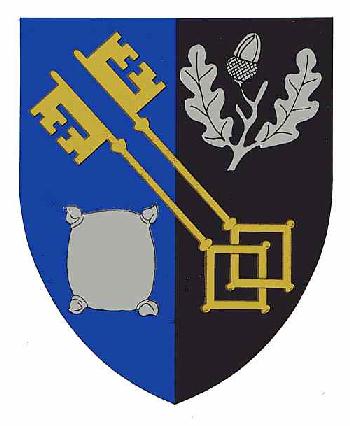 Per pale Azure and Sable two Keys in bend wards upwards and outwards bows interlaced Or between in dexter base a Woolpack and in sinister chief a Sprig of Oak fructed Argent.

The 1934 arms, see image below, were replaced on September 20, 1974 as the towns of Kingston-on-Thames and Richmond were no longer in Surrey.

The shield is divided into halves, blue and black. The blue, and also the gold colour in the design are taken from the arms of the Warrennes, the first Earls of Surrey The black derives from the Arms of the towns of Guildford and Godalming. The interlaced gold keys which lie across the shield diagonally represent the power of the ancient Abbey of St Peter at Chertsey which once held extensive lands in Surrey. The keys form part of the Arms of the Diocese of Winchester - which used to include much of Surrey - and have also been retained in the Arms of the Diocese of Guildford. The sprig of oak symbolises Surrey's extensive rural areas and is drawn from the Badge of the FitzAlans, former Earls of Surrey. It also appears, incidentally, in the mouth of the Supporters of the Arms of the Duke of Norfolk, the present Earl of Surrey.

The woolpack recalls the importance of the wool trade in medieval Surrey and acts as a reminder of the ancient wealth of the County.

The old arms differ by having an ermine bar from the arms of the town of Richmond, and a crown for the town of Kingston-on-Thames.