From Heraldry of the World
Your site history : Tönning
Jump to navigation Jump to search 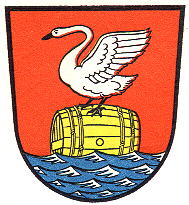 The barrel in the arms is a canting symbol (Tonne = barrel). the wavy lower part of the arms indicate the fact that the city borders the estuary of the Eider river. The swan and the barrel represent the story that Tönning was founded on the spot where a swan, standing on a barrel, was washed ashore.

Tönning was first mentioned in 1187 and became a city in 1590. At the same time the first seal was made, which showed a large ship, with in front of the main mast a shield with two lions and a barrel. The ship is probably taken to indicate the position on the Eiderstedt peninsula and the lions are the lions of Schleswig.

The smaller seals of the city only showed a barrel The swan on a barrel appears first in a 18th century seal. The combination was also used on the ship's flags at the time.

In the 19th century the city adapted the swan and barrel as their arms, however in different colours, as shown below.