From Heraldry of the World
Your site history : Tauberbischofsheim (kreis)
Jump to navigation Jump to search 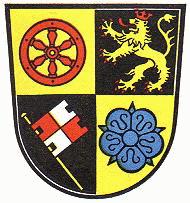 The arms are a combination of symbols for the four main rulers in the district prior to 1809. The wheel in the first quarter is the wheel of the State of Mainz. The lion is the lion of the Pfalz, as the Northern part of the district belonged to the Pfalz. The banner is the arms of the State of Würzburg. The rose in the fourth quarter is taken from the arms of the Princes of Wertheim.