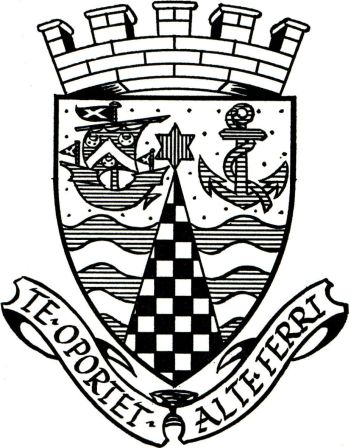 Per fess wavy Or and in base undy Azure and Argent: a pile chequy of the Last and Sable [issuant from base] ensigned of a mullet of six points Gules in the honour point, accompanied on the dexter by a lymphad of the Second, flagged of Scotland, her sail charged with the arms of Durie of that Ilk, viz.: Azure, a chevron Argent between three crescents Or, and on the sinister by an anchor also Azure.

Below the Shield which is ensigned of a coronet appro­priate to a Burgh is set in an Escrol this Motto "Te Oportet Alte Ferri".

Tayport, also called Ferryport-on-Craig or South Ferry, was created a Burgh of Barony for Robert Durie of that Ilk in 1598-99 and was raised to a Burgh of Regality in 1725 in favour of Robert Douglas of Glenbervie.

The arms, which were registered in honour of the Coronation of Queen Elizabeth II are really a heraldic version of the non-armorial Burgh seal adopted in 1892.

The silver and black chequered pile with the red star recall the lighthouse; silver and black are also the Young colours and thus allude to the first Provost of the Burgh, Mr. James Stephen Young. The star could also refer to the Douglas connection and also to the Scott family who had the lands of Scotscraig nearby.

The anchor is for the port and the ship for the ferry which went across the Firth to Broughty Ferry in Angus and is said to have been the oldest in Scotland; on its sails are the Durie arms.

The Latin motto, which was composed by the distinguished Scottish poet and scholar, Professor Douglas Young, grandson of the first Provost, puns on the fact that the town was both a Tay port and a Tay ferry. Its meaning is "It behoves thee to bear thyself loftily" and is thus appropriate both for the lighthouse and for the citizens of the Burgh.