From Heraldry of the World
Your site history : Tempelhof (Berlin)
Jump to navigation Jump to search

State : Berlin
Incorporated into : 1920 Berlin
Since 2001 part of Tempelhof-Schöneberg 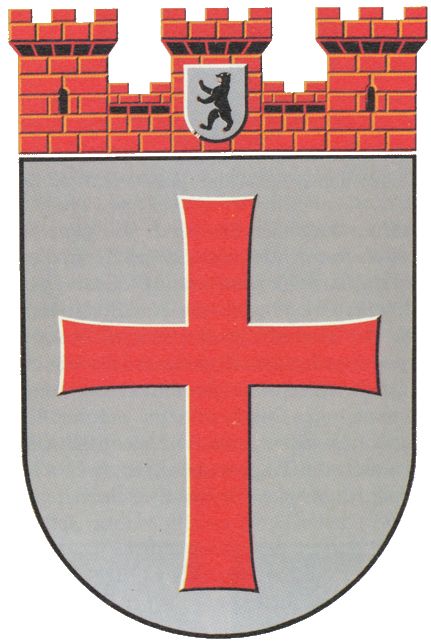 The name of the district is derived from the Estate of the Templar knights until 1312. The cross is the symbol of the Knights of the Templar.


As with all arms of the Berlin districts, a mural crown with a small shield with the arms of Berlin could be used. The district was formed out of the former municipalities of Tempelhof, Marienfelde and Mariendorf. The initial proposal for the arms from 1949 showed a divided shield with the cross combined with the bear of Berlin. After that a long discussion started on the shape of the cross and the addition of the bear. It took until 1957 before the arms above were finally adopted.

In the 1920s the arms below were assigned by Hupp in the 1920s.
These arms of Tempelhof showed a jumping deer, which supposedly referred to the old hunting grounds near Tempelhof of the Princes of Brandenburg. However, it was found out that Hupp had made a mistake and that the village did not use arms. The seal with the deer was not from the village, but from the Berlin family Tempelhof.