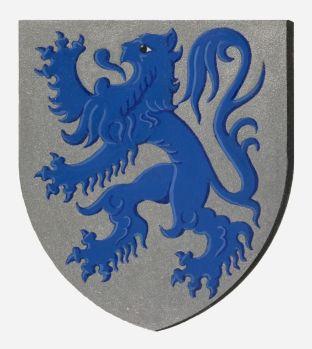 The arms show lion, which already appeared on the oldest known seals of the city, dating from 1312. The lion most likely originally was the lion of Brabant, even though this lion was not normally crowned. In 1435 the city became a possession of Jan Hinckaert, illegitimate son of the Duke of Brabant. His arms were shown on a paining from 1480, and showed a quartered shield with in the first and fourth quarter a silver crowned lion on a black field with silver billets, and in the second and third quarter the Hinckaert arms, a blue crowned lion. Why the council in the 1830s applied only for the Hinckaert arms is not known.

On the arms from 1819 and 1838 the lion was crowned, the current arms do no longer show the crown a sthe crown did not appear on the medieval seals.