The arms show a silk cotton tree, or so-called "God tree". This tree is of local historical interest, as under such a tree the Spanish signed a treaty with the local chieftain, effectively making the area a Spanish territory.

The six six-pointed stars above the shield represent the mainland and the five main islands in the country.

The arms were initially adopted in 1968, but during the rule of Francisco Nguema (1972-79) the arms were replaced by a logo, see below.

Equatorial Guinea was a Spanish colony consisting of two parts, the island of Fernando Poo (Bioko) and the continental colony of Rio Muni. In 1959 the two colonies were combined to Spanish Guinea, which in 1968 became Equatorial Guinea. 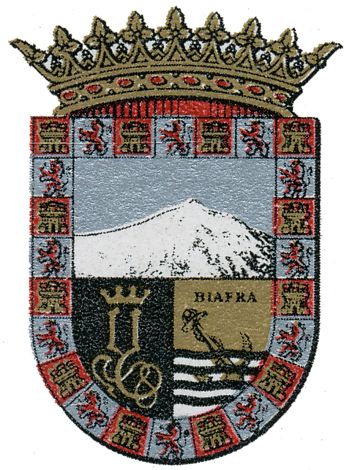 In 1472, the Portuguese navigator Fernão do Pó was the first European to visit the island. He named it Formosa Flora ('Beautiful Flower'), but in 1494 it was renamed after its discoverer. The Portugiese settled on the island, but were replaced by the Dutch from 1642-1648. In 1778 the island was ceded to the Spanish King Charles II. The Spanish did not establish strong rule on the island, and the British took over the island on a lease from 1827-1843. In 1843 the Spanish established full control.

The arms show in the upper half the island itself. The lower half shows the monogramme of King Charles II. The lower left quarter shows an anchor in the waves and the name Biafra. The meaning thereof I do not know.

The bordure is the Royal Bordure of Castille and Leon. 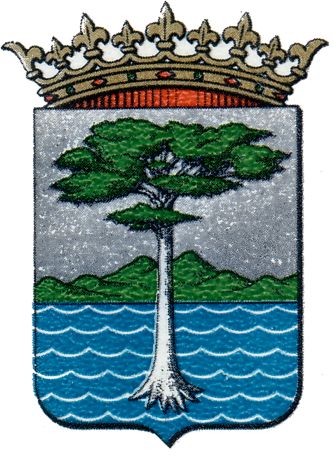 Río Muni was also ceded to the Spanish by the Portuguese in 1778. The arms of the province show the same tree and were the base of the present national arms.

Another version of the arms is shown below : 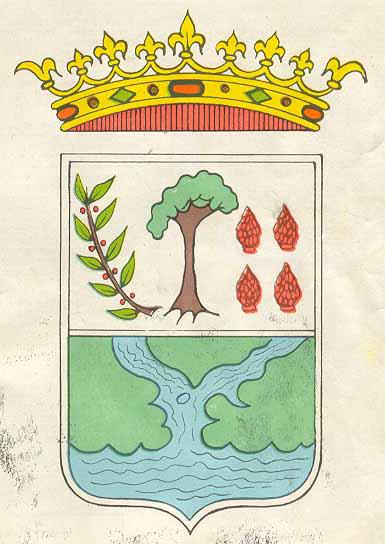 In these arms the tre eis combined with the main crops and the geographical situation of the colony.