The National Arms of Zambia

THE NATIONAL ARMS OF ZAMBIA 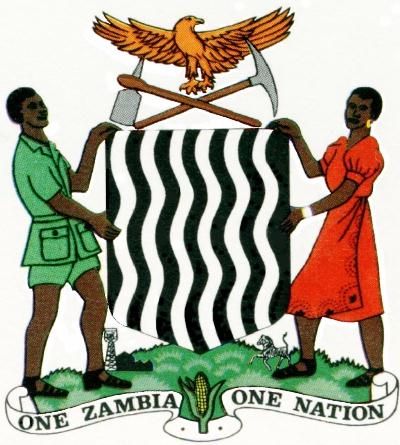 Zambia attained independence on 24 October 1964 and the arms were adopted the same day.

The contents of the shield and the crest are taken from the state's predecessor, the (British) Protectorate of Northern Rhodesia. However, in the Northern Rhodesia arms a fish eagle (Haliætus vocifer) appears in the chief and holds a freshly caught fish (see below). Here the pallets symbolise the Victoria Falls, and by extension the Zambezi River, from which the state takes its name and occupy the entire shield and the eagle is transferred to the crest.

Ill-informed criticism of the Northern Rhodesia arms led to a popular belief that the fish symbolised colonial oppression, and there were also objections to the "dead fish" in fact, the fish would in real life still be wriggling. The eagle has also been misinterpreted by the heralds in London, who failed to take into account that the fish eagle is virtually identical in appearance to the American national bird, the bald eagle (a member of the same genus, named Haliætus leucocephalus) it is brown with a white head. The only easily recognisable difference between the two is the fish eagle's habit of catching its fish, so the fish in the claws is an essential mark of recognition. However, in the arms of both Northern Rhodesia and Zambia, the eagle is coloured gold.

The crest shows symbols of agriculture, while the (very) small additional elements on the compartment represent the copper mining industry (mine head), the country's main source of foreign exchange, its wildlife (a major tourist draw) and the maize which is the people's staple diet.

The supporters naturally represent the population, dressed in Western-style clothing to emphasise modernity (even down to the use of footwear) and to minimise ethnic differences. The man wears a safari suit, the simplified Western dress favoured by white male civil servants in the final years of the colonial era.

The arms were officially granted on August 16, 1939 and were in use until 1954. The meaning has already been described above.

In 1954 Northern and Southern Rhodesia (Zimbabwe) were joined with Nyasaland (now Malawi) to form the Federation of Rhodesia and Nyasaland. 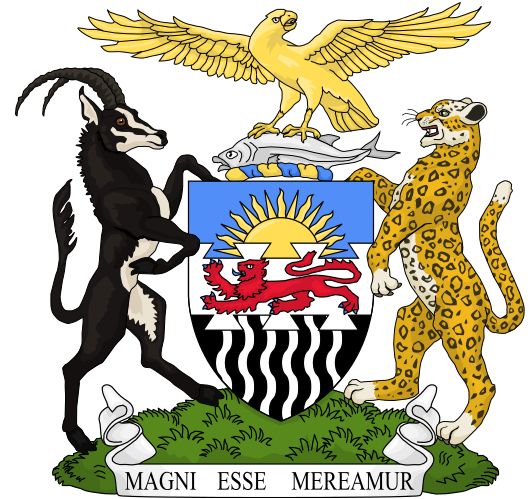 The arms of the Federation were granted on July 22, 1954 and include elements from the arms of all three territories.