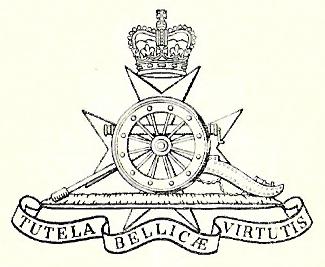 On old-fashioned gun superimposed upon the Maltese Cross; below, a scroll inscribed "Tutela Bellicæ Virtutis" (Custodian of military prowess); the whole ensigned with a crown. The Cross is silver the reminder in gilt.

The Gun alludes to the Artillery function and the Cross symbolises Malta. The whole Badge alludes to that of Britain's Regiment of Royal Artillery.