History: Formed in 1917 as the Tank Corps from the Hevay Branch of the Machine Gun Corps. Become in 1922 Royal Tank Corps and in 1939 Royal Tank Regiment.
Regimental Headquarters: Aliwal Barracks, Tidworth. 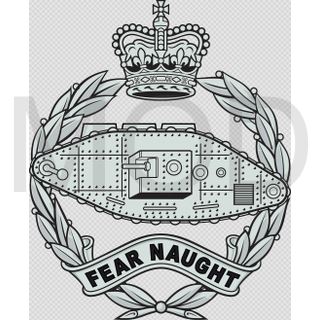 Within a laurel wreath surmounted by a crown, the reprensentation of a modern tank; on the bottom of the wreath a scroll inscribed "Fear Naught". In silver plate.

The badge shows a World War I Tank.