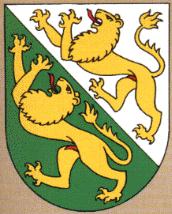 The arms of Thurgau are based on the arms of the Counts of Kyburg.

The changes in the rule over Thurgau did not affect the arms until 1798, when the French conquered the area. The new government wanted to keep the old arms, but wanted it surrounded by all kinds of new symbols, such as a resting lion, a man with a Phrygian hat, and some more. The arms were never adopted, and when the new Swiss Republic regained independence it was decided in 1803 to continue the old arms.

Not even one month later, however, it was decided to change the red and gold colours with green and silver, the colours of freedom. As supporter a woman, the symbol of patriotism, was used. The colour of the lion were not described, but in practice, they were gold. These were the arms as they are used today. The supporter was not used very often.

As the golden lion on a silver field is against the heraldic rule of tincture, already in the middle of the 19th century there were attempts to change the colours of the arms. The government did not react until 1938 when new arms were proposed, in silver and green. The second world war prevented the adoption of the arms, and in 1947 the issue was taken up again. Again the arms were proposed in green and silver, but the lions now had silver tongues and claws (in the 1938 proposal these were red) (see below).

Later that year new arms were proposed, now based on the historical Kyburg/Thurgau arms and not on the Revolutionary colours of the 19th century (see below). The General Assembly of the Canton, however voted against the new arms and thus are the arms from 1803 still used.