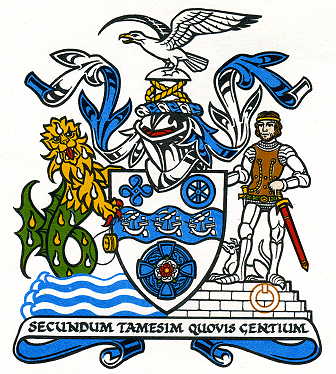 Arms : Argent on a Fess wavy between in chief a Ship's Screw and a Wheel Azure and in base a Celtic Cross also Azure charged in the centre with a Tudor Rose proper three Lymphads Argent.
Crest : On a Wreath of the Colours an Albatross rising proper from a Bollard Sable roped Or.
Supporters : the dexter a Sea-Lion guardant Or gutty Sable the tail Vert gutty Or and Argent holding in the dexter claw a Block Or tackle Sable and on the sinister a Knight in Armour tempus 1370 resting the exterior hand on the hilt of his sheathed sword a Hound at his feet all proper upon a Compartment per pale Water barry wavy Argent and Azure and a representation of a Stone Quay proper.
Motto: 'SECUNDUM TAMESIM QUOVIS GENTIUM' - By the Thames to all peoples of the World

The Celtic cross marks the establishment of Christianity in Thurrock by Saint Cedd in the 7th Century, and the Tudor rose within the cross refers to Queen Elizabeth I's visit to Tilbury in 1588. The ships on the blue wavy band are a reference to Thurrock's long association with maritime trade. The wheel represents both industry and agriculture and the ship's propeller relates to ship repairing. The supporters were added on May 14, 1976 to mark the change to Borough status in 1974. The medieval knight in armour is Radulphus de Knevynton whose brass is in Aveley church and the mythical sea lion represents in its black, gold and white teardrops, the local products: oil, margarine, soap and cement. The Latin motto refers to Thurrock's international links and can be translated as:

'By Thames to all the peoples of the world'.