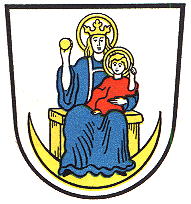 Tiengen probably received city rights already in the 12th century from the Counts of Krenkingen. In the middle of the 13th century the city was acquired by the Chapter of the Konstanz cathedral. In 1482 the Counts of Sulz acquired Tiengen. The oldest seal is known from 1282 and shows the Madonna, patron saint of the Konstanz cathedral. In the 16th century the composition was placed on a crescent and ever since this composition has been used on the seals and arms of the city.

The colours differed widely during the centuries and were formally described in 1957.