From Heraldry of the World
Your site history : Torfaen
Jump to navigation Jump to search 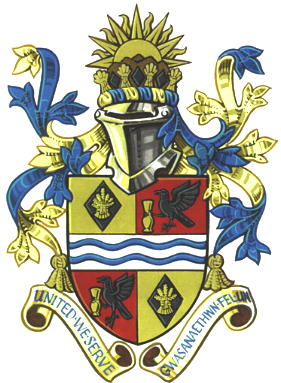 Arms : Quarterly Or and Gules overall a Fess Argent charged with two Barrulets wavy Azure first and fourth quarter a Lozenge Sable charged with a Garb Or second and third quarters a Crow wings addorsed proper holding in its dexter claw a Japanned Vase Or.
Crest : On a Wreath Or and Azure issuant from a Circlet of Garbs Or and Lozenges Sable rising behind a Range of Hills proper a Sun in splendour Or.
Motto: 'UNITED WE SERVE'

The arms were officially granted on May 29, 1974. The motto was officially adopted in 1975 but was amended in 1996 to a bilingual version.

The blue wavy lines represent the Afon Lwyd (Grey River); the rising sun depicts new authority and its terrain; black diamonds depict coal; the wheat sheaves represent the agriculture of the county borough and the crow derives from Cwmbran (Valley of the Crow); and the vase represents the world famous Pontypool Japanware.

Literature : Image and information provided by the [Torfaen Council.