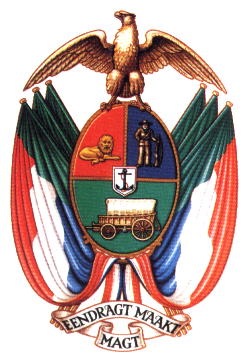 When the provinces were allowed to choose their own arms in 1950, the Transvaal province adopted to restore the old arms of the Zuid-Afrikaansche Republiek, but this time properly described. The new arms were drawn in 1951, adopted by the province in 1954 and officially granted in 1955.

The arms also showed the correct wagon used by the Boers, unlike the wrong type as shown in the arms of the Transvaal Colony.