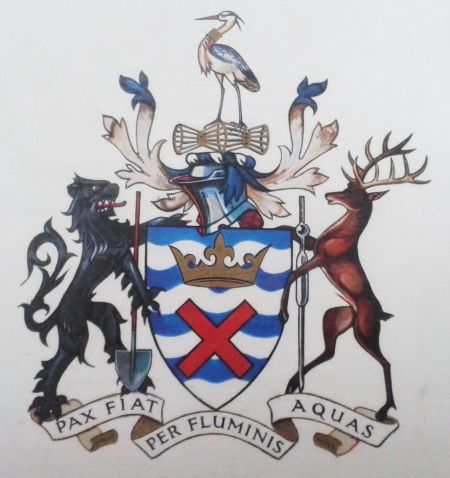 Arms : Barry wavy of eight azure and argent, a saltire couped gules, and in chief an ancient crown Or.
Crest: On a wreath of the colours, Standing on a fish wheel Or a heron proper collared Or.
Supporters: On the dexter side a lion sable supporting between the forelegs a ditching spade proper, and on the sinister side a stag likewise supporting a pipette proper.
Motto: Pax fiat per fluminis aquas

The arms were officially granted on August 1, 1967.

The blue and silver wavy bars on the shield represent the rivers, the crown and red saltire cross of Mercia denote that ancient kingdom whose boundaries roughly coincided with those of the Trent Basin.

The crest is composed of a Fish Weel on which stands a collared heron symbolic of the fisheries work of the authority.

The motto means : Let peace be among the waters.

Literature : Information leaflet from the authority