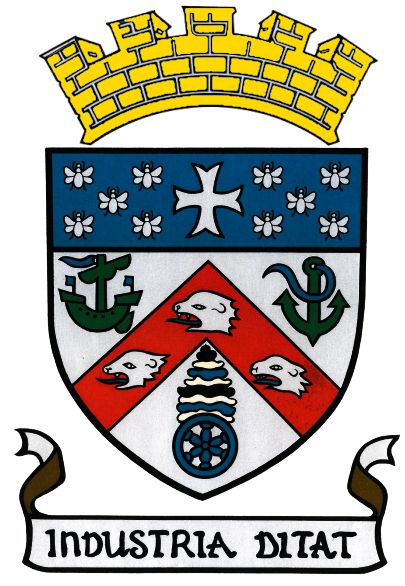 Argent, on a chevron Gules, between a lymphad, sails furled Vert, flagged Azure, and an anchor of the Third, roped of the Fourth, both in chief, and in base a wheel of the Fourth with a pile nebuly issuant therefrom harry wavy of eight, Sable, Argent, Azure and Argent, alternately, three otters' heads erased of the field, langued of the Fourth; on a chief of the Fourth, a cross moline between ten bees volant, five on either side, of the First.

Below the Shield which is ensigned of a coronet suit­ able to a Police Burgh (viz.: Azure masoned Argent) is placed in an Escrol this Motto "Industria Ditat".

Troon developed as a port and a resort once the railway (originally horse­ drawn) from Kilmarnock to Ayr was opened in 1812.

The arms show in a heraldic form many features of the device on the Burgh seal adopted in 1896, a seal which is said to have been designed by William, 6th Duke of Portland.

In the chief, the silver cross moline of Bentinck on its blue field refers to the Duke of Portland, the Superior of the Burgh, while the ten bees recall the beehive on the seal and denote industry.
The silver field and red chevron in the lower part of the shield come from the arms of the Cochrane Earls of Dundonald (Troon is in Dundonald parish), and the otters' heads refer to the Fullartons who owned the lands of Troon up to 1805.

The ship and anchor represent the shipping and shipbuilding interests of the town, while the wheel with its pile nebuly stands for the Rocket-type engine purchased by the 4th Duke of Portland to operate on the railway line between Troon and Kilmarnock, probably the first in Scotland, for transporting coal from the Central Ayrshire coalfields to Troon for export to other parts of Britain.