The Burgh never had registered arms, but only used the seal below. 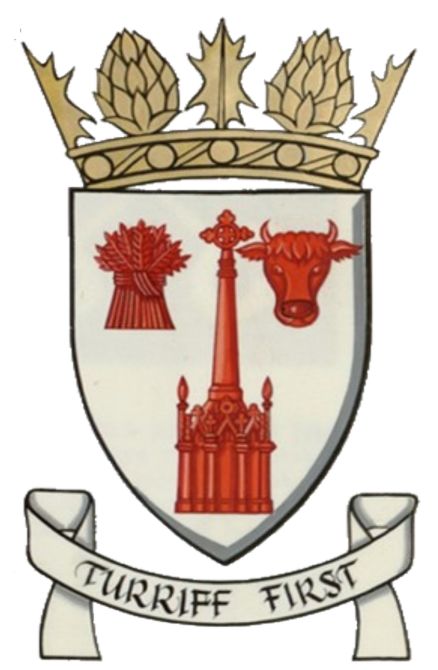 Argent, a representation of the Mercat Cross of Turriff between a garb in dexter chief and a cow's head cabossed in sinister chief Gules.

Above the Shield is placed a Coronet appropriate to a statutory Community Council, videlicet:- a circlet richly chased from which are issuant four thistle leaves (one and two halves visible) and four pine cones (two visible) Or, and in an Escrol below the same this Motto "Turriff First".

The arms show the Mercat Cross of the burgh which was the main feature of the device on the burgh seal adopted in 1893. The silver and red colours are derived from the arms of the Hay Earls of Erroll, for long the Superiors of the town.

This twenty-feet high red-sandstone cross, which dates from the sixteenth century, was a notable landmark on the main road from Aberdeen to Elgin; it was restored in 1865 and set upon an elaborate Gothic sculptured base.

The garb and the cow's head recall that the district is set in rich agricultural country; the latter could also be a reference to the celebrated "Turra coo" which was the central figure in controversial litigation over taxation arrears in the early part of the twentieth century.