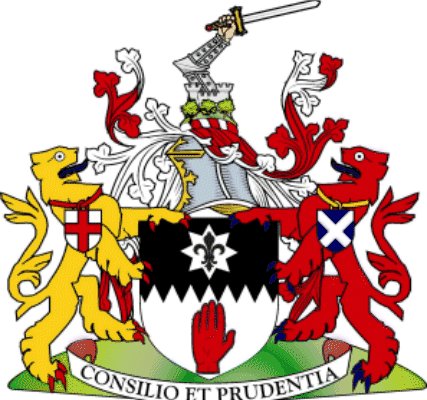 Per fesse indented Sable and Argent, in chief a mullet of eight points of the second charged with a fleur-de-lys of the first, in base a dexter hand appaumée Gules. Crest: On a wreath Argent and Gules, On a mount and in front of a castle of two towers, a hurst, issuant from the battlements of the castle a dexter arm embowed in armour, the hand grasping a sword in bend sinister, all proper. Supporters: On either side a lion rampant, that to the dexter Or gorged with a ribbon, pendent therefrom an escutcheon Argent charged with a cross Gules, and that to the sinister Gules gorged with a ribbon Argent, pendent therefrom an escutcheon Azure charged with a saltire also Argent. Motto: Consilio et Prudentia.

The red hand represents the O’Neills who were the dominant Gaelic family in the area. They ruled as the Earls of Tyrone and had their seat at Dungannon Castle which is shown as part of the crest. The black and white shield stands for the Powers, while the fleur de lys for the Beresfords, two other important families. The eight-pointed star refers to the eight ancient baronies of Tyrone. The cloak is in red and white which have been the sporting or “county colours” since 1930. The two supporters are an English and Scottish lion, with a shield of St. George and St. Andrew respectively, to represent the origins of the settlers during the Plantation of Ulster. The name motto “Consilio et Prudentia” is Latin for “Wisdom and Prudence.”