Difference between revisions of "Uckfield" 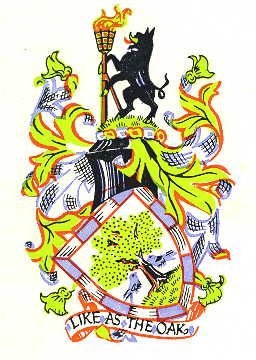 Arms : Argent on a Field in base Vert an Oak Tree fructed and leaved proper between two Martlets respectant in fesse Azure all within a Bordure gobony of the first and last.
Crest : On a Wreath of the Colours upon a Mount Vert a Boar rampant Sable armed and unguled Or supporting a Cresset fired proper.
Motto : 'LIKE AS THE OAK'