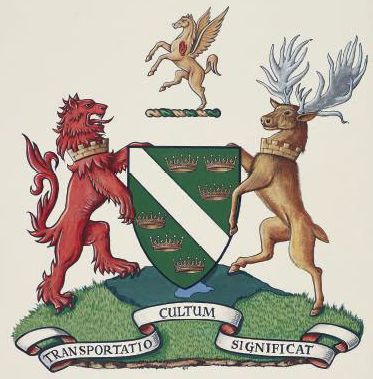 Arms: Vert, a bend argent between six earls' coronets Or.
Crest: On a wreath Or and vert, A -winged horse rampant Or charged on the shoulder with a dexter hand appaumee couped at the wrist gule8.
Supporters: On the dexter side a lion gules, and on the sinister side an Irish Elk proper, both gorged with a mural crown Or.
Motto: Transportatio cultum significat

Granted by the Chief Herald of Ireland in 1960.

Arms a green field for Ireland; six earl’s coronets for the six counties; the bend for a road or a railway.

As a crest a gold flying horse charged with the red hand of Ulster.

The supporters are an English Red Lion and Irish Elk. The motto TRANSPORTATIO CULTUM SIGNIFICAT means Transport is civilisation.