From Heraldry of the World
Your site history : University of Aberdeen
Jump to navigation Jump to search 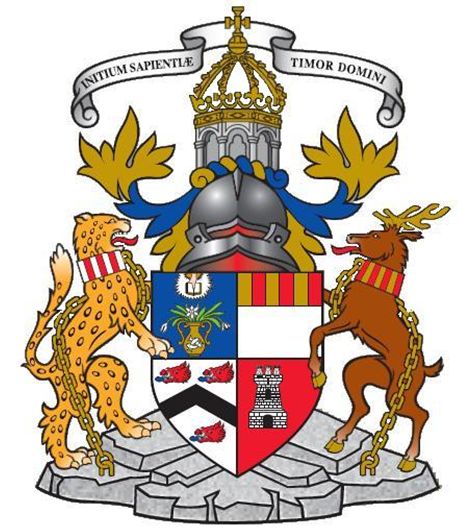 1st Azure a boughpot Or charged with three salmon in fret and containing as many lilies of the garden, the dexter in bud, the centre full blown and the sinister half blown, all Proper flowered Argent issuant downwards from the middle chief amid rays of the sun a dexter hand holding an open book likewise Proper. 2nd Argent a chief paly of six Or and Gules. 3rd Argent a chevron Sable between three boars' heads erased Gules. 4th Gules a tower triple-towered Argent masoned Sable windows and port of the last.

The arms were officially granted in 1888.

The 1st quarter shows a differenced version of the (non official) arms of Old Aberdeen - site of King's College. The 2nd quarter shows the arms of Keith, Earl Marischal, founder of Marischal College

Both colleges merged to form the Aberdeen University.