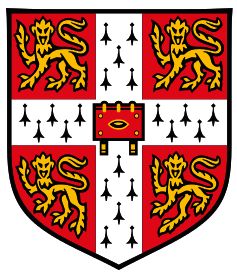 Arms: Gules, on a cross ermine between four lions passant guard­ ant Or, a Bible lying fesseways of the field, clasped and garnished of the third, the clasps in base.
Motto: Hinc lucem et pocula sacra.

The exact meaning of the arms is not known. The red field and the lions obviously are a reference to the English arms. The book clearly a symbol for learning. The cross ermine may be referring to the Royal status of the university and its former use of the Royal arms.

The motto HINC LUCEM ET POCULA SACRA is sometimes used with the arms, but it does not appear in the 1571 patent (in which the university was given newstatues, nor in the grant on 1573. The motto, however, is recorded at the College of Arms

The Patent of Arms of 1573 is addressed to the Chancellor of the University, the celebrated Sir William Cecil, Lord Burghley, Lord Treasurer of England, who took a keen interest in heraldry and genealogy. Cecil had entered St. ]ohn's College at the age of 14 in 1535 but was removed from the University six years later in an unsuccessful attempt to stop him marrying the impecunious Mary Cheke. He became a Master of Arts only as a result of the successful visit to Cambridge which he arranged for Queen Elizabeth I in 1564.

The University consists of 31 colleges and halls. All use arms, see below: