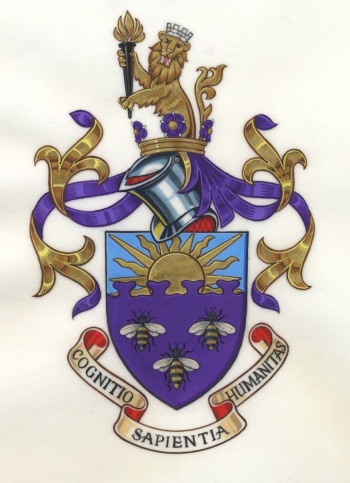 Arms: Per fess nebuly enhanced Bleu-celeste and Purpure issuant in chief a Sun in Splendour Or in base three Bees volant proper.
Crest: Upon a Helm Within a Coronet composed of four Roses Purpure barbed Argent seeded and set upon a Circlet Or a demi Lion guardant Or murally crowned Argent holding in the paws a Torch erect Sable enflamed Or.
Motto Cognitio Sapientia Humanitas

The arms were officially granted in 1956 and confirmed in 2004. Unfortunately we have no information on the meaning or origin of these arms yet.