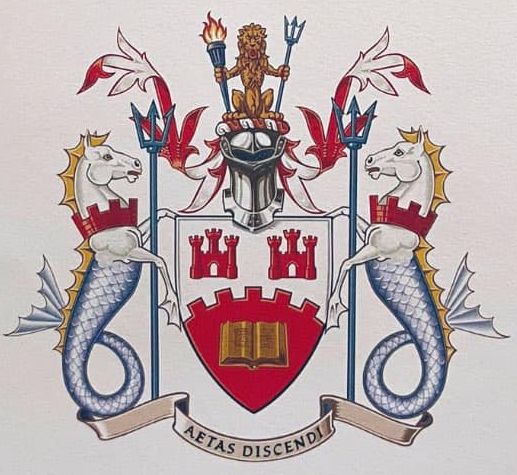 The arms were officially granted in 1995.

The sShield contains two triple-towered castles, representing Newcastle upon Tyne, and an open book in reference to learning. The arched line of battlements which divide the shield refer to the Roman Wall, a historic feature of Northumberland. The curve of the arch reflects the King George the Fifth Bridge over the River Tyne, and more generally, the bridge alludes to the University's role in the transmission of knowledge to and strong links with the society in which it is located.

The crest is a lion, grasping a flaming torch as an emblem of learning, and a trident as the emblem of the old god of the River Tyne, and also reflecting the University's origins in the three original 9 constituent parts of the unified institution.

The supporters are seahorses derived from the arms of Newcastle upon Tyne, but differentiated by the addition of crowns around their necks, alluding to the Roman Wall, and by tridents which refer to the River Tyne.

The Latin motto, Aetas Discendi, 'a lifetime of learning', encapsulates the role of the University in the promotion and advancement of learning