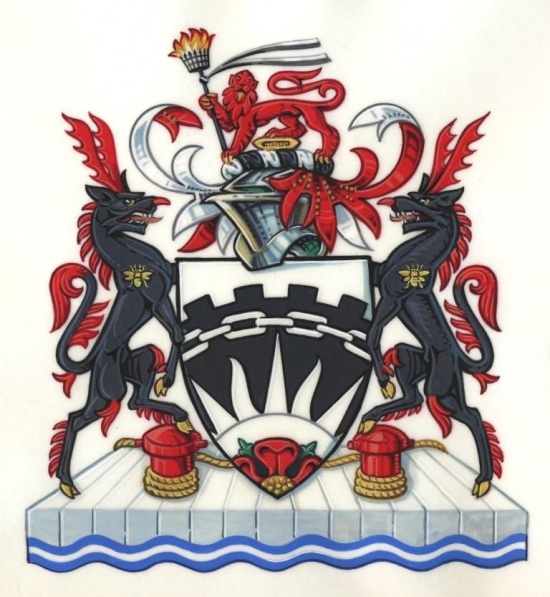 Arms: Sable above a demi Sun issuant in base Argent charged with a demi Rose likewise issuant Gules barbed and seeded proper a Chain fesswise throughout enhanced and enarched and a Chief embattled and enarched Argent.
Crest: Upon a Helm with a Wreath Argent and Sable A Lion passant guardant Gules armed langued and resting the dexter hind paw on a Shuttle fesswise Or and supporting with the dexter forepaw a Fire Beacon Sable enflamed proper tied to the pole thereof by a knot at the mid point of its length and flying to the sinister a Riband party lengthwise Argent and Sable Mantled Gules lined Argent.
Supporters: On either side a Heraldic Antelope Sable attired langued and tufted Gules teeth Argent unguled and charged on the shoulder with a Bee volant Or and resting the interior hind foot on a Mooring Bollard Gules wound round with a Rope Or all upon a Compartment comprising a Quayside of grey stone setts issuant from Waves of Water proper.

The arms were officially granted on January 6, 2017.

In the centre is a shield depicting a rising sun within a cog and chain, representing industry, industriousness and mental processes. This aligns directly to the underlying ethos of the founding colleges in the late 19th century and the University’s primary focus today in developing excellent industry partnerships. This central element forms the new University logo launched last year.

The lion represents bravery, strength and valour and carries a torch to represent truth and knowledge, whilst resting his foot on a shuttle, alluding to Salford’s history in the cotton and silk weaving industry.

The two antelope supporters that sit either side of the shield are taken from the coat of arms of the city of Salford and are adorned with the bees of Manchester. They are resting their feet on a mooring bollard, similar to those found at Salford Quays, where the University has a campus.

Beneath the coat of arms is the University motto, Altiora Petamus, meaning “Let us seek higher things”, describing a constant drive to achieve excellence.

The waves beneath the motto represent the waters that run through Salford; both the River Irwell and the Quays. 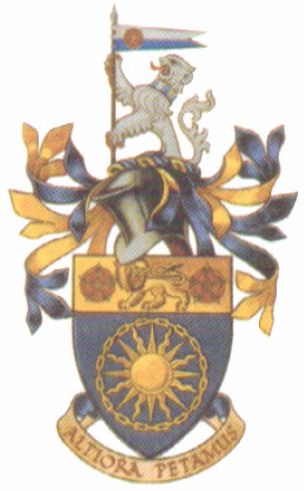 Literature: New image from http://www.college-of-arms.gov.uk/news-grants/newsletter/item/138-april-2017-newsletter-no-50; background send to me by mail