From Heraldry of the World
Your site history : Unterallgäu
Jump to navigation Jump to search 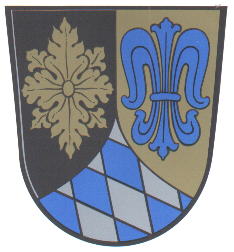 The right half shows the rose of the arms of the Imperial Abbey of Ottobeuren, which ruled the for many years the Southern part of the district. The fleur-de-lis is derived from the arms of the Fugger family, which ruled several estates in the district. In the 17th century the Dukes of Bayern from the Wittelsbach dynasty acquired several estates, and the whole area became aprt of Beyern in 1814. This is symbolised by the diamonds of Bayern in the base of the shield.