From Heraldry of the World
Your site history : Unterlamm
Jump to navigation Jump to search 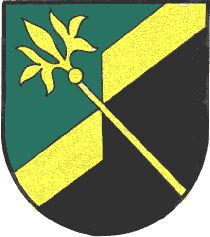 The basic design of the arms is based on two facts. First the two villages of Ober- and Unterlamm (Upper- and Lower-lamm), and the fact that the name is derived from a slavic word for landslide or depression. The landslide is symbolised by the division line, the two villages by the golden segments.

The staff is a lily-sceptre and is the symbol of St. Mary, patron saint of the parish.

The colours are a combination of the imperial colours gold and black, as the area historically was part of the Holy Roman Empire, and the green colour of the State of Steiermark.