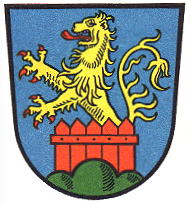 The lion is taken from the arms of the two families that were of importance in the town in the 17th and 18th century, Huefnagel and Chlingensperg. The fence is a canting symbol for the -hofen (garden) part of the name. The mountain in the base of the shield is the Parsberg, which is next to the town.